Pak. Denies Use Of Airspace To Kovind For Iceland Visit 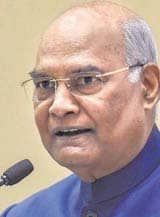 Federal Aviation Minister Ghulam Sarwar Khan said on Saturday that Pakistan denied President Ram Nath Kovind the use of Pakistani airspace for his flight to Iceland this month because of India’s continued aggression against and oppression of the Kashmiri people.

“We got India’s request for their President’s flight. It was discussed with relevant quarters and decided that enough is enough, no more concessions for India,” he told The Hindu.