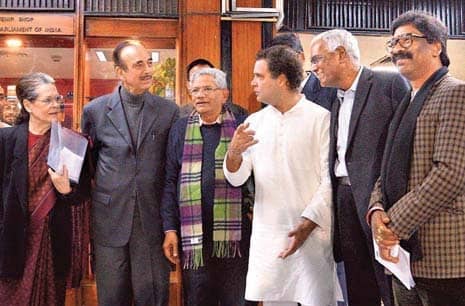 Trinamool, SP, BSP and AAP stay away from meet convened by Congress

Leaders of Opposition parties on Monday demanded the immediate withdrawal of the Citizenship Amendment Act (CAA) and appealed to non-BJP Chief Ministers, who had earlier announced not to carry out a proposed nationwide National Register of Citizens (NRC), to suspend the exercise of enumeration of the National Population Register (NPR) as it is “a prelude to a nation-wide NRC”.

A joint resolution was adopted after a meeting — convened by Congress president Sonia Gandhi and attended by leaders of 20 Opposition parties — discussed the current political situation arising out of the widespread protests against the CAA and the violence on campuses.

Ms. Gandhi asserted that the “Modi-Shah government stands exposed for its inability to govern and provide security to the people”.