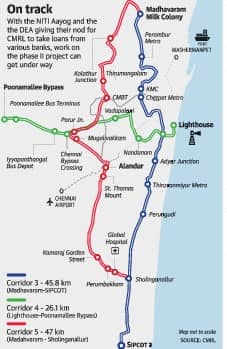 The NITI Aayog, the policy thinktank of the Central government, has finally given its nod for Chennai Metro Rail Limited (CMRL) to take loans from various international banks for its phase II project.

Highly placed sources told The Hindu that CMRL had received approval for the phase II project a few days ago. The Department of Economic Affairs (DEA) had also given its consent.