Karnataka Govt. Fell Under Its Own Weight: Nadda 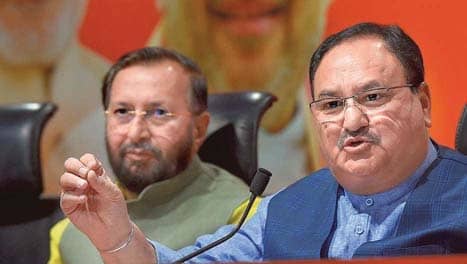 Denying hand in defections in the JD(S)-Congress coalition, BJP leader says his party is synonymous with stability.

BJP working president J.P. Nadda on Friday said the Janata Dal (S)-Congress coalition government in Karnataka had fallen under the weight of its own contradictions, dismissing claims that his party had engineered defections.

Mr. Nadda was addressing a presser to mark the first 50 days of the present Modi government, presenting a report card of the same on a day when Karnataka saw BJP State president B S Yediyurappa take oath as Chief Minister. “They [Congress-JD-S] fell under their own weight due to internal reasons. The BJP is synonymous with stability. Wherever we go, we bring stability,” he said.