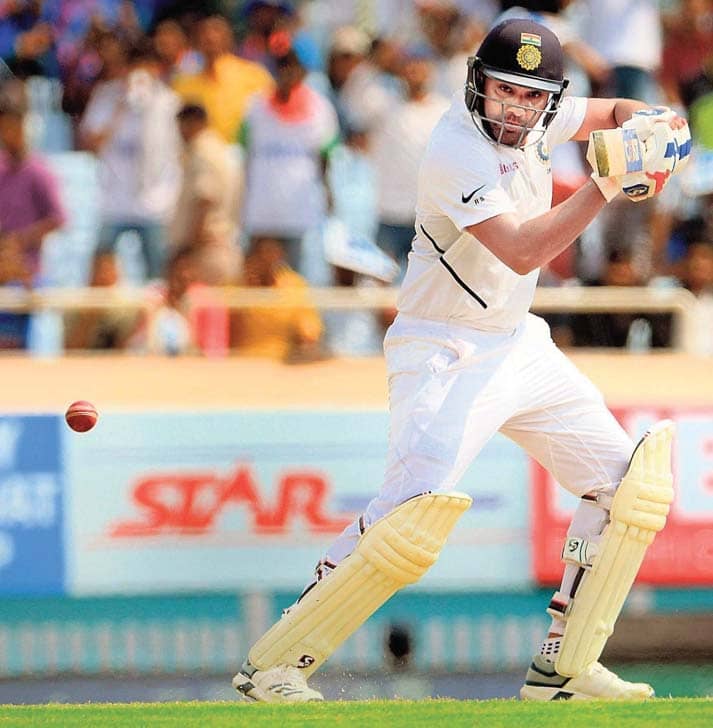 India’s decision to turn Rohit Sharma into a Test opener hasn’t worked out so badly after all. He now has three hundreds from four innings, and has inflicted so much pain on South Africa that India will wonder why this could not have been tried sooner.

On Sunday, Rohit completed his maiden Test double hundred, off 249 balls, taking his tally of runs for the series past 500. He was toying with the bowling when he was dismissed, for 212, and it would have surprised nobody if he had gone on to raise a triple century.

India declared its first innings on 497 for nine, with Ajinkya Rahane registering his first Test hundred on home soil in three years.

By the close of play on the second day of the third Test, the good Sunday crowd had been treated to what has become a familiar trope of the Freedom Series: a mountainous Indian total, a declaration late in the afternoon, and a clatter of South African wickets in the evening session.

Mohammed Shami snared Dean Elgar with the second ball of the innings, the batsman unable to get out of the way of a well-directed short delivery, before Umesh Yadav got rid of Quinton de Kock with a brutal lifter.

South Africa was nine for two, and in an ocean of bother, before bad light forced an early end to proceedings again. There have only been 121.3 overs of play over the two days, but India will believe it has plenty of time to push for a win.