Hungry Tides In The Sundarbans 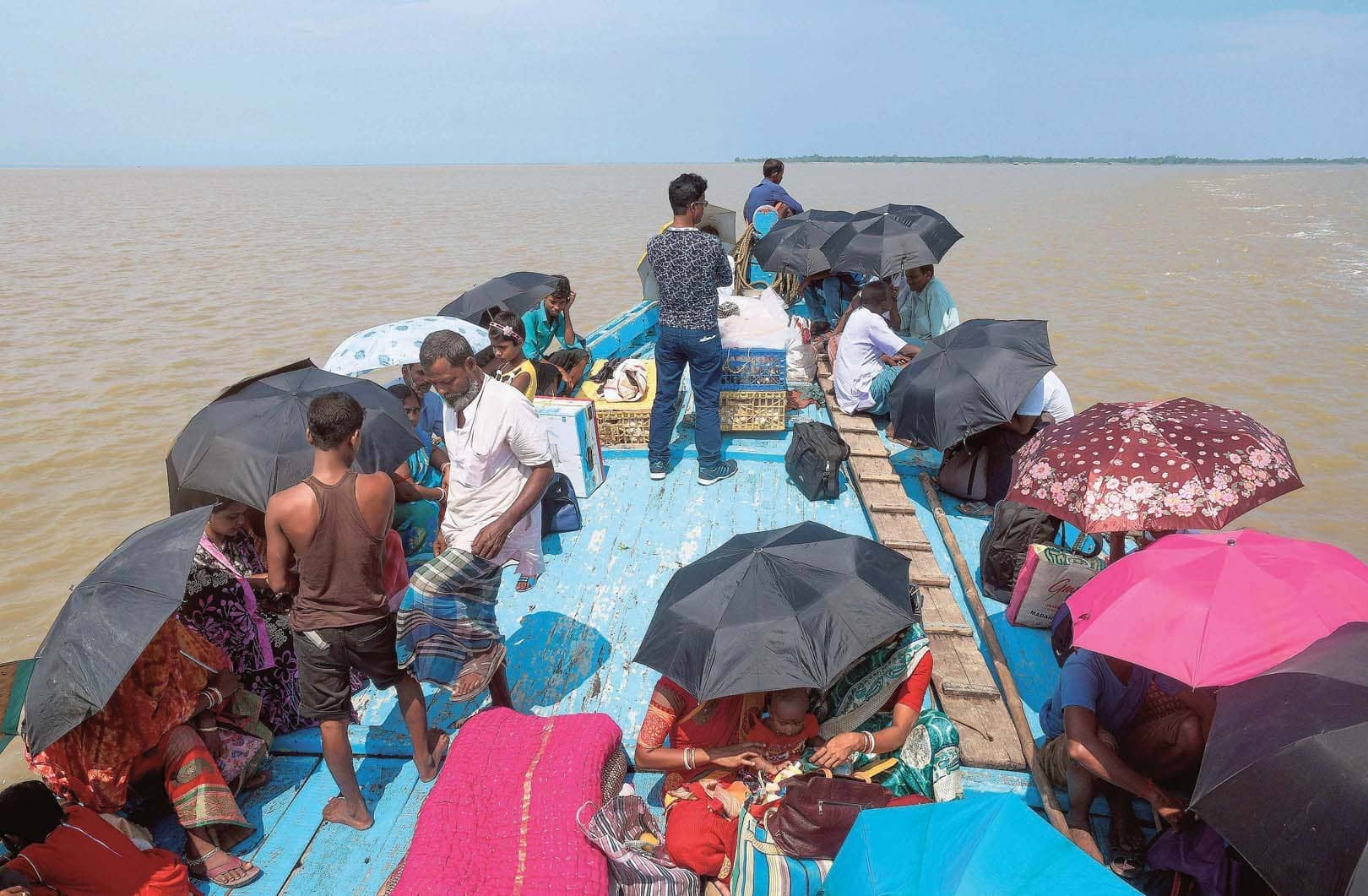 Residents of Ghoramara are being forced to migrate as the small island is slowly being submerged by the sea. Now environment experts warn that the neighbouring islands of Ganga Sagar and Mousuni are facing a similar fate. Shiv Sahay Singh reports on life on the fragile islands of the Sundarbans

“How many times have you rebuilt your house?” Sujit Mondal does not answer at first; he just gazes at the deceptive calm of the river he has to cross by boat to reach his home in Ghoramara. The 44-year-old resident of the sinking island of the Sundarbans archipelago has clearly been asked this question more times than he can count. Finally he answers: “At least four”.

Tucked under Mondal’s arm are several metres of neatly rolled net tarpaulin. He has bought it for ₹1,800 to cover the betel leaf trees he had planted a few weeks ago. He places it in his old mechanised boat. During the half-hour journey to his house, Mondal speaks of storms, particularly Cyclone Aila that wreaked havoc in the region in 2009. Tourists, journalists, researchers and climate watchers have all told him that the next cyclone will have a devastating impact on the quickly eroding island, Mondal says.

The ravages of monsoon are visible as the boat reaches Ghoramara. On a thatched hut hangs a green board that reads ‘Ghoramara Ferry Ghat’. The board is the only constant on the island; everything else is always changing. In fact, every year, with houses and acres of land being swallowed by a hungry sea, the topography of the island alters. The total area of Ghoramara was 8.51 sq km in 1975; it reduced to 4.43 sq km in 2012. The rapid erosion of the island, located at the mouth of the Bay of Bengal, has grabbed the attention of all those attempting to understand how rising sea levels and climate change are impacting lives and migration patterns.

Ghoramara is unique in other ways too. When Prime Minister Narendra Modi demonetised all ₹500 and ₹1,000 banknotes in 2016, Ghoramara, which had no bank or ATM facility, survived on credit as there was no way of exchanging cash. Three years later, there is still no bank on the island. People make do with a post office. The last boat from the island departs for mainland West Bengal long before sunset, leaving the islanders cut off from the rest of the country at night. There is no grid-connected electricity and no din of modern life; only the sound of waves lapping the shores.

Mondal shows me his betel leaf plantation, situated a few hundred metres from the sea. He says his neighbour Nantu Das’s crops were destroyed after the embankments were breached by seawater. The precariousness of their lives and livelihoods is obvious, but when asked what it is like to be living on a sinking island, the residents show annoyance. “What is the point of asking us if the state does not care?” they retort. Sanjib Sagar, the gram pradhan of the island, has maintained that issues like sea level rise cannot be dealt with at his level.

There is no proper healthcare either. Rituparna Ghati, an auxiliary midwife, says in her eight years of work, doctors set foot on the island only once, to attend a vaccination camp to prevent an outbreak of Japanese Encephalitis. Ghati is perhaps the only health worker in the entire State whose target population has reduced from 5,623 in 2011 to 4,696 now. There is no infrastructure for institutional deliveries on the island. Her job is to ensure that pregnant women are admitted to a state-run facility on the mainland days before the baby is due. Once her work is over, Ghati heads back to the mainland.

Given the state of affairs, it is natural that the rate of migration from Ghoramara is high. There are more women than men on every boat ride. In every other household, the men have left the island in search of jobs. They work as labourers in Kerala or Tamil Nadu, returning only during festivals or when the rising waters destroy their homes forcing them to rebuild yet again.

Visiting Ghoramara for the first time, Pranabesh Maity, a resident of a nearby island, Ganga Sagar, drops in at a primary school to find out the drop-out rate of students. Sabyasachi Pradhan, the teacher in-charge of Mandirtala Free Primary School, is prompt with figures. “This year we have 126 children. Last year there were 136, and the year before there were 144. People know that they will have to move out and are getting their children admitted at different places,” he says.