Hong Kong Protesters Appeal To Trump To ‘Liberate' Them 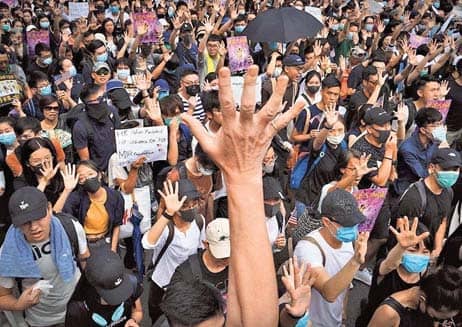 Thousands of Hong Kong protesters on Sunday sang the Star Spangled Banner and called on U.S. President Donald Trump to “liberate” the Chinese-ruled city, before violence broke out in the latest in a three-month series of clashes and unrest.

The protest started peacefully but fell into a now familiar pattern of barricades, window smashing and street fires, this time in the smartest banking and shopping district of the former British colony, as evening fell.

Police moved in with running battles with stonethrowing protesters who fled to nearby Admiralty and the bar district of Wan Chai and shopping area of Causeway Bay.

Police stood by earlier as protesters, under a sea of umbrellas against the subtropical sun, waved the Stars and Stripes and placards demanding democracy. “Fight for freedom, stand with Hong Kong,” they shouted before handing over petitions at the U.S. Consulate. “Resist Beijing, liberate Hong Kong.”