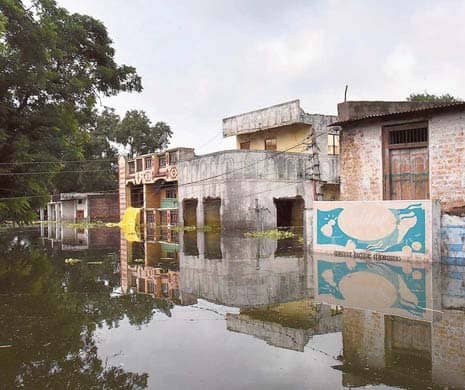 As water level continues to rise in the Sardar Sarovar Dam, the swelling backwaters have submerged several settlements.

Hiralal Solanki is waiting for the backwaters in the swelling Narmada to recede so that he can return home. Cooped up in a 10 feet-by-10 tin shelter at a relief camp with two younger brothers, a sister-in-law, and an assortment of recovered household items stacked around, he refuses to leave for Gujarat, where his parents were resettled more than two decades ago.

Just eight, and a minor, in 1994, when his parents were given a five-acre plot in Panchmahal district, 192 km away, he and his siblings were left behind in the care of relatives.

Today, leaving behind two shops and a ramshackle hut at Kotda village in Madhya Pradesh’s Dhar district that faces submersion, the families of Mr. Solanki and 130 others have shifted to the camp set up by the Narmada Valley Development Authority (NVDA) in the neighbouring Nisarpur, which too is facing submergence.