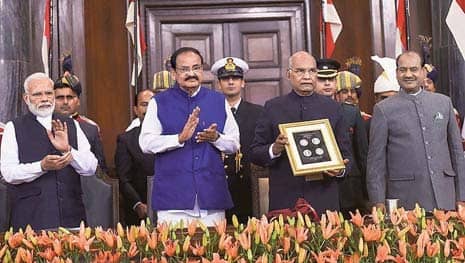 Organs of state, constitutional functionaries, citizens must abide by it: Kovind

The President made the observation at a joint sitting of Parliament in the Central Hall of Parliament to mark Constitution Day on the 70th anniversary of the adoption of the statute.

The event was boycotted by a majority of the Opposition parties over the Maharashtra government formation issue, and they staged a protest in front of the Ambedkar statue in Parliament House.

The Bahujan Samaj Party, the Biju Janata Dal and the Telangana Rashtra Samithi, however, attended the function.