Blunting The Economic Impact Of A Pandemic 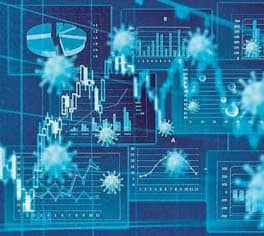 That screeching noise that you hear is of the wheels of commerce grinding to a halt. The effect of the strong clampdown measures taken by the government to arrest the spread of the coronavirus is beginning to be felt across a swathe of the economy.

Prime Minister Narendra Modi, in his address to the nation on Thursday, said that a task force under Finance Minister Nirmala Sitharaman has been constituted to assess the economic impact of the pandemic and suggest palliative measures.

Here are some suggestions for the task force to discuss.

Those such as cab drivers, restaurant waiters, mall workers, domestic help, itinerant retailers and other casual job workers are either already without jobs and incomes or will soon find themselves in that position.

It may not be a bad idea to consider cash transfers of a fixed amount to these vulnerable sections. There are 33 crore accounts under the Pradhan Mantri Jan Dhan Yojana that can be leveraged for this purpose. There is also an efficient Public Distribution System prevalent in most States through which the beneficiaries can be identified for a cash handout.

There are a total of 23.53 crore ration cards in the country according to the National Food Security Portal. Assuming that all of these are below poverty line cards, a transfer of ₹1,000, which is the least that should be considered, will cost the Centre over ₹23,500 crore. Granted that the funds requirement is huge even for this basic amount. We will look at funding possibilities later in this piece.

Last month, Hong Kong announced a cash handout of HK$10,000 to every permanent resident as a supportive measure. The United States is also weighing the option of a cash handout totalling $250 billion to its citizens.