Ahmedabad Joint Rally With Trump Will Be Historic: Modi 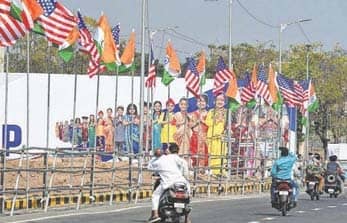 Hours before the arrival of U.S. President Donald Trump for his first visit to India, Prime Minister Narendra Modi said their joint rally in Ahmedabad’s Motera Stadium will be a “historic” event.

Mr. Trump will arrive in Ahmedabad just before noon on Monday at the start of a 36-hour visit that is expected to see the signing of several defence agreements and MoUs on homeland security, space and medical cooperation.

American officials have said Mr. Trump will raise the situation in Kashmir and the on-going protests over the Citizenship (Amendment) Act during talks.

“India looks forward to welcoming President Donald Trump. It is an honour that he will be with us tomorrow, starting with the historic programme in Ahmedabad,” said Mr. Modi in a tweet on Sunday.

The message echoed the earlier comment by Gujarat Chief Minister Vijay Rupani who also sent out a social media message welcoming the American head of state.