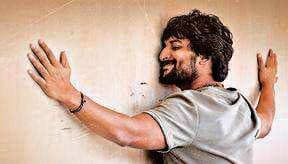 Even as his Gang Leader is set for release, Nani moves on to his next with Indraganti

Every actor goes through the Friday blues before their movie release. During promotions though, they project confidence and contentment. Ahead of the release of Gang Leader, Nani is his usual jovial self and says he abhors taking a break from shoot before he starts his next. This is also one reason why he has been moving from one film to the other for the past few years and also taking care of his production house that kept him busy. As soon as Gang Leader releases, he’s quickly moving to the sets of Indraganti Mohan Krishna’s V.

At the media interaction, he says he’s glad to have been asked a question on Jersey not making enough money at the box office. He elaborates, “For a film like Jersey which has a 36year-old cricketer, who’s a loser, lacks physical fitness and has issues in dealing with his wife and son that all becomes a part of a tragic climax, has broken every stereotype in Telugu cinema and has collected 30 crore at the theatres. How can you say it collected less? When Middle Class Abbayi minted money, people questioned me if I will ever do a good, content oriented script and now when I do Jersey, people remark it didn’t beat MCA at the BO. Jersey is being remade in multiple languages and I’m looking ahead for a release in China and at the domestic level, made profits. There’s no reason for complain.”