Ageless Nadal Clinches His 19th Major In A Thriller 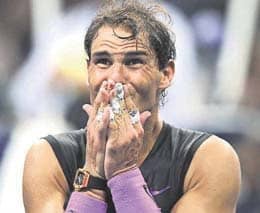 Medvedev gives the champion a run for his money, stretching the final into one of the longest in tournament history

The 33-year-old Spanish left-hander, who moved one shy of Roger Federer’s alltime men’s record of 20 Grand Slam triumphs, became the second-oldest New York champion in the Open era after Ken Rosewall in 1970 at age 35.

It took a supreme effort from the Spanish maestro, who nearly became the first player to drop the final after leading by two sets since Ted Schroeder in 1949.