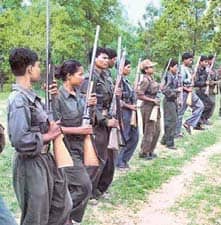 The Dantewada Assembly by-election in Chhattisgarh is headed towards an emotionally charged battle with both the Congress and the BJP fielding widows of regional stalwarts slain by Maoists on separate occasions.

The contest, to be held on September 23, became imminent after BJP MLA Bhima Mandavi was killed in a Maoist attack while on the stump in April, two days before the Lok Sabha election in Bastar, where he held ground as the lone BJP MLAs amid 11 Congressmen.