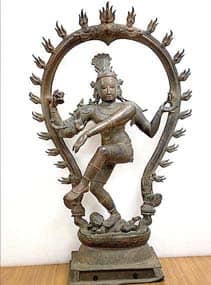 Australian authorities handed it over to officers; Special Officer Pon Manickavel bringing it home from Delhi by train

A Nataraja idol, stolen 37 years ago from a temple in Kallidaikurichi in Tirunelveli district and smuggled outside the country, is on its way back from Australia.

Following consistent efforts of the Idol Wing special officer and retired Inspector General of Police A.G. Ponn Manickavel, the Australian authorities formally handed over the idol to officers of the wing at New Delhi on Wednesday.