Trump sure of ‘fantastic' deal, but after ‘tough negotiations' 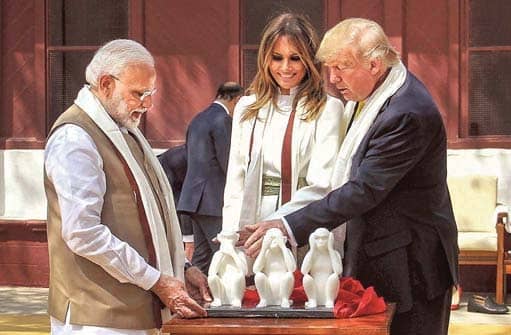 US President Donald Trump on Monday exuded confidence about striking a “fantastic deal” with India on the trade front, but also expressed concern over the “tough negotiations”.

At the very start of his address at the Motera cricket stadium in Ahmedabad, Trump clarified that “serious” talks would take place in Delhi, and hinted that a “very major (trade deal)... among the biggest-ever trade deals” is in early stages of discussion.

“Over the course of my visit, Prime Minister (Narendra) Modi and I will also discuss our efforts to expand the economic ties between the two countries... We are in early stages of a discussion for an incredible trade agreement to reduce barriers for investments between the US and India,” he said.

“I am optimistic that working together, the Prime Minister and I can reach a fantastic deal that’s good and even great for both our countries. Except there is a very tough negotiation,” added the US President, who started his two-day India tour from Ahmedabad.