Namaste Trump! PM To Receive US President In Ahmedabad Today 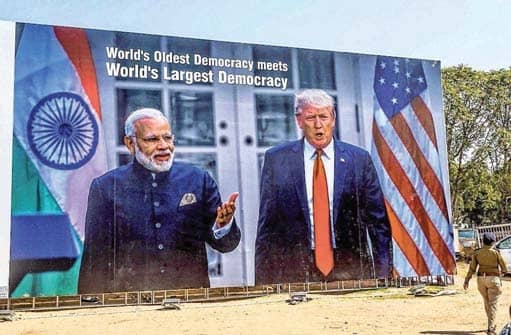 If sobriquets could be borrowed, Ahmedabad, perhaps, would like to be called the Maximum City, at least for a day. The reason is the much-anticipated visit of US President Donald Trump and First Lady Melania Trump, who will kick-start their first India tour from here amid much excitement and fanfare. And, Ahmedabad is all charged-up to gift the head of the US Government the spectacle of a lifetime.

Since taking charge as the Prime Minister in 2014, Narendra Modi has been bringing foreign heads of governments to Gujarat — his home State. And in a first, he has managed to get an incumbent US President to land in Gujarat.

On Monday, Prime Minister Narendra Modi will arrive at Ahmedabad’s Sardar Vallabhbhai Patel International Airport a little earlier than 11.40 am — the scheduled arrival of Air Force One, the US President’s aircraft — to receive Trump, his wife Melania, daughter Ivanka and son-in-law Jared Kushner with a red-carpet welcome.

A guard of honour by the three wings of Armed Forces will be accorded to Trump, who is the seventh US President to visit India since Independence.