Modi Doesn't Have Any Understanding Of The Economy, Says Rahul In Haryana 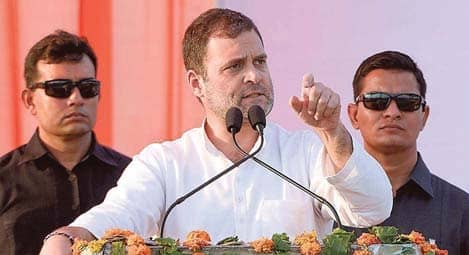 Addressing an election rally near Mahendragarh in Haryana on Friday, former Congress president Rahul Gandhi alleged that Prime Minister Narendra Modi does not understand economics and he works to please a handful of billionaires.

The Nehru scion also attacked media for focussing their coverage on Modi than reporting the livelihood issues of common people.

The rally was supposed to be addressed by Congress president Sonia Gandhi, but she got unwell and sent her son to address the rally. “She was about to come. She has a viral infection. So she asked me to meet you and talk to you. I will come even at the last second on your call,” Rahul Gandhi said.

Rahul Gandhi pointed at the state of economy during his brief speech. “The unemployment rate is highest in 40 years. There are no jobs for youth. Small shop owners and businessmen are facing crisis due to demonetisation and GST,” he said.