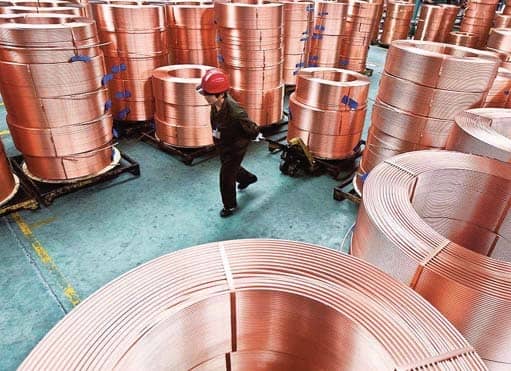 With global inventories overflowing, prices have crashed by 22 per cent in LME this year

‘Dr Copper’, as the analysts call it, is a leading indicator of the economic health.

Therefore, the recent rout in copper price gives us a fair idea of the bleak expectations regarding the global economy.

Copper has been the weakest base metal so far this year, losing 22 per cent since the beginning of the year. On Friday, it was quoting $4,774 per tonne in the London Metal Exchange (LME).

It has lost about 14 per cent in March alone.

The metal’s price, which was quoting at over $7,200 in LME in early 2018, lost about 17 per cent that year as the US and China began the trade war. In the same year, the dollar rallied, weighing on the commodity’s price.

In 2019, copper saw its price go up by 3.4 per cent on the back of serious supply-side constraints.

According to a report released by the International Copper Studies Group (ICSG) last week, the mine production in 2019 contracted by 0.7 per cent to 20.4 million tonnes (MT), following a 1 per cent production decline in Chile (the largest producer) due to lower ore grades and some production disruptions.

Moreover, there was a significant 45 per cent temporary output decline in Indonesia as two major copper mines were transitioning to new ore zones.

The dip in overall production was despite an increase in mining output in Peru, China and the US, major copper producers.

Refined copper production contracted in 2019 due to temporary smelter shutdowns in Japan, Chile and Zambia.

The output dropped 0.6 per cent to 23.9 MT despite output growth in China, the largest producer of refined copper.