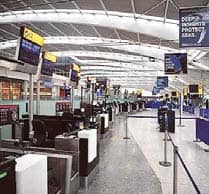 Globally 1,45,000 fliers, including in India, likely to be affected

The agony for passengers could continue on Tuesday and also on September 27 as the industrial action by pilots is scheduled for these days as well.

“With no details from BALPA on which pilots would strike, we had no way of predicting how many would come to work or which aircraft they are qualified to fly, so we had no option but to cancel nearly 100 per cent our flights,” the airline said in statement.