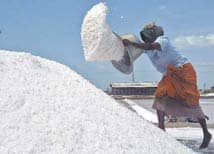 Survey finds that the national average for household coverage is 76.3%

Tamil Nadu has the lowest consumption of iodised salt despite being the third biggest producer of salt in the country, according to a first-of-its-kind national survey to measure the coverage of iodised salt.

The study shows that 76.3% of Indian households consumed adequately iodised salt, which is salt with at least 15 parts per million of iodine. The five worst performers were Tamil Nadu (61.9%), Andhra Pradesh (63.9%), Rajasthan (65.5%), Odisha (65.8%) and Jharkhand (68.8%). The survey was conducted by Nutrition International in collaboration with the All India Institute of Medical Sciences and the Indian Coalition for the Control of Iodine Deficiency Disorders (ICCIDD). The survey tested the iodine content in samples of cooking salt from households to estimate the coverage of iodised salt.