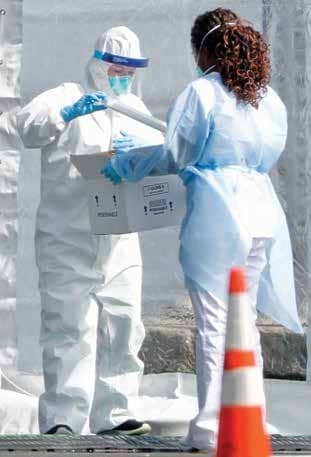 California, among the worst hit in the country, has told its 40 million residents to stay at home, the most drastic move yet in US

PARIS: More than 10,000 people have now died in a Coronavirus pandemic that has swept from China throughout the world, forcing the confinement of tens of millions in their homes.

As the virus has marched westwards, the severity of the outbreaks and the focus of concern has shifted from Asia to Europe, with increasingly tough restrictions being imposed by national governments.

The US state of California, among the worst hit in the country, has told its 40 million residents to stay at home, the most drastic move yet in the United States to combat the pandemic.

However, the California measures will not be enforced by police unlike in France, Italy, Spain and other European countries where people face fines if they break the rules.

Germany's biggest state Bavaria on Friday became the first region in the country to order a lockdown for two weeks, imposing "fundamental restrictions" on going out.

The strict measures follow the template set by China, where a lockdown imposed in Hubei province where the new Coronavirus first emerged appears to have paid off.

The country is now reporting on a handful of new infections each day, apparently from overseas visitors.

Italy is battling the single most deadly outbreak on the planet with 3,405 deaths, followed by 3,248 in China and Iran with 1,433, according to an AFP tally of official data.