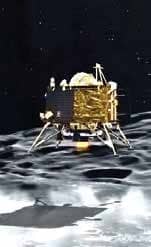 BENGALURU: The ‘Vikram’ lander lies on the lunar surface as a single piece, unbroken and it is in a tilted position following a hard landing while efforts to re-establish link with the probe were on, an ISRO official said on Monday.

Vikram, which encases rover ‘Pragyan’ went out of contact during its final descent, when it was just 2.1 km above the lunar surface, in the early hours of September 7.

“The lander is there (on the lunar surface) as a single piece, not broken into pieces. It’s in a tilted position,” an ISRO official associated with the mission claimed.