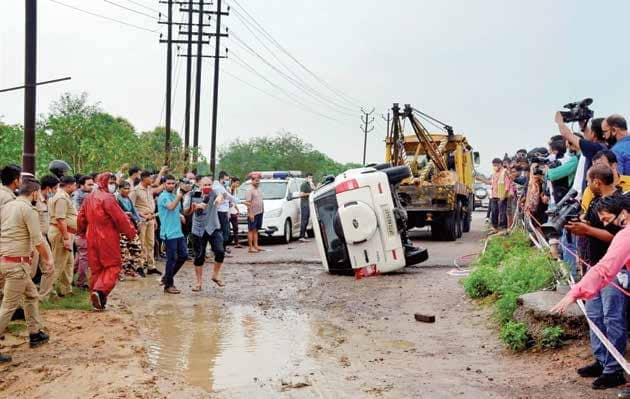 NEW DELHI: Within 24 hours of the Uttar Pradesh Police Special Task Force (STF) arresting history-sheeter gangster Vikas Dubey, he was shot to death in custody on Friday morning in what the state police are calling an encounter on the highway to Kanpur. The police said that one of the cars in their convoy had flipped on its side a short while after they cleared the Bara Toll Plaza to enter Kanpur and Dubey had tried to flee after snatching the service pistol of an officer.

They said Dubey was asked to surrender but started firing on the policemen, who then returned the fire, killing the gangster who had just a week ago ambushed a raiding party of the UP Police, killing eight of their team members. According to Dr RB Kamal, the principal of Kanpur’s LLR Hospital, “Vikas Dubey had three bullet injuries on the chest and one on his arm.”

The UP STF, in a statement, said that the driver of the vehicle had lost control when a herd of cows and buffaloes suddenly came in his way, which is what caused the accident. The police added that despite “all efforts made to apprehend Dubey alive”, the gangster started firing indiscriminately and hence they had to return the fire, during which he was killed. Two cops were also injured, with all of them stable and bullets having grazed two of them.

Head constable Shivendra Singh Sengar and constable Vimal Yadav of the STF were injured in the firing by Dubey, the statement added.

Curiously, several journalists who were following the UP Police convoy on its way from Ujjain to Kanpur were stopped at least 2 km before the section of the highway where the encounter took place.