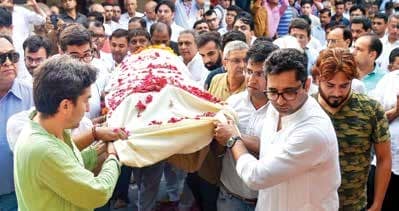 NEW DELHI: Eminent jurist and outspoken former Union minister Ram Jethmalani, who fought some of the most difficult criminal cases and defended the accused in the Indira Gandhi and Rajiv Gandhi assassination cases, passed away on Sunday at the age of 95.

Jethmalani breathed his last at 7.45 am at his official residence in New Delhi. He was not keeping well for a few months, his son Mahesh Jethmalani said.

He died a few days before his 96th birthday on September 14. Jethmalani’s last rites will be performed around 4:30 pm on Sunday at the Lodhi Road crematorium here, his son said.