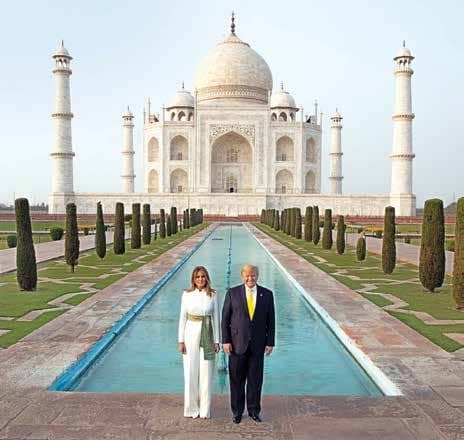 AHMEDABAD/AGRA: Massive amenity and bonhomie was witnessed at the ‘Namaste Trump’ event in Ahmedabad on Monday as two world leaders Prime Minister Narendra Modi and US President Donald Trump heaped praises on each other with the latter saying: “America loves India, America respects India and America will always be faithful and loyal friends to the Indian people.” He also announced defence deals between the two countries worth $3 billion and even spoke of both the nations being in the early stages of discussion for an “incredible” trade agreement to reduce barriers of investments, which will be among the “biggest ever”.

“We are in the early stages of discussion for an incredible trade agreement to reduce barriers of investments, between the US and India and I am optimistic that working together, the Prime Minister and I can reach a fantastic deal that’s good and even great for both of our countries,” Trump said, adding the Indian Prime Minister is a “very tough” negotiator.

“As we continue to build our defence cooperation, the US looks forward to providing India with some of the best and most feared military equipment on the planet. We make the greatest weapons ever made. We make the best and we are dealing now with India,” he said.

Trump added that Prime Minister “Modi is an exceptional leader” and has already made significant reforms in his country, and the world is looking forward for even more rapid improvement in India’s business climate.