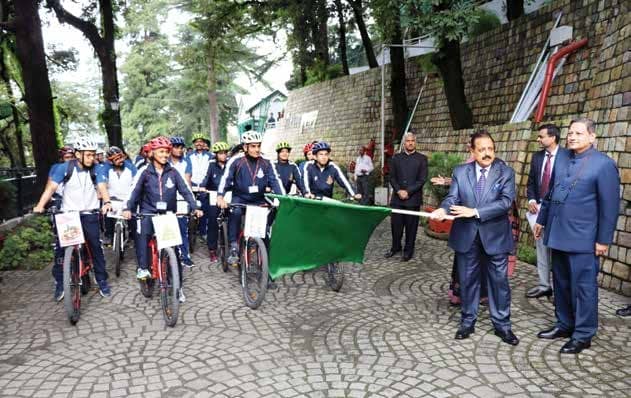 Dr Jitendra Singh marked the Diamond Jubilee of LBSNAA, interacting with officer-trainees as well as employees of the Academy

“Sixty years in the life of an institution are quite different from sixty years in the life of an individual. For an individual, the countdown has certainly begun – but for an institution, especially an institution dedicated to learning, it is just a milestone, albeit a significant one.” Thus, spoke Dr Jitendra Singh in his remarkably witty, lucid and frank interaction with the officer-trainees of the 94th FC at LBSNAA, as well as employees of the Academy last week (September 1) on the occasion of the Diamond Jubilee celebrations of the Academy. He also flagged offa cycle rally for ‘Eat Right Campaign’ by the newly established ‘Safe Planet’ initiative of the Academy in collaboration with the Food Safety and Standards Authority of India (FSSAI), inaugurated the Physiotherapy centre at the Wellness Centre, witnessed the signing of an MoU between the Academy and the All India Institute of Ayurvedic education for the establishment of an Ayurvedic Treatment Centre at the Academy, launched a Primer of rhymes in Hindi and English for the children of the Lalita Shastri Balwadi, and last but not the least, released the special first-day cover on the Academy brought out by the Chief Post Master General (CPMG) of Uttarakhand, Colonel Sukhdev Raj.