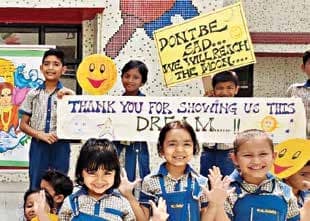 NEW DELHI: “Sampark toota hai, Sankalp nahi” (contact is lost, not the resolve) is the message that Delhi government school students have for scientists at ISRO who were working on Chandrayaan-2 mission.

Contact with Chandrayaan-2’s lander Vikram, which encases the rover, Pragyan, was lost in the early hours of September 7, when it was just 2.1 km above the lunar surface and seconds before touchdown.

According to ISRO officials, efforts are underway to see whether communication can be re-established with the lander but chances of that could be bleak with full system functionality a prerequisite to restoring contact