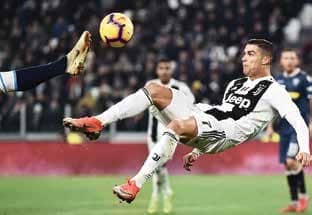 ROME: Cristiano Ronaldo scored for a record-equalling 11th consecutive Serie A game in his 1,000th professional match as Juventus extended their league lead with a 2-1 win over basement club SPAL.

The 35-year-old tapped in six minutes before the break on Saturday to equal the mark held by Gabriel Batistuta and Fabio Quagliarella.

The five-time Ballon d’Or winner has scored 25 goals in all competitions this season for Juventus, including 16 in his current run of 11 matches.

Aaron Ramsey added a second after an hour, before Andrea Petagna pulled one back from the spot for SPAL, amid controversy as the penalty was awarded following a VAR review despite the pitchside monitor not working.

It got Juventus back to winning ways away from home after consecutive defeats against Napoli and Hellas Verona, and ahead of next week’s trip to French club Lyon in the Champions League last 16, first leg.

Maurizio Sarri’s side opened up a four-point lead on second-placed Lazio who travel to Genoa on Sunday.

Inter Milan are six points behind the champions before their game at home against Sampdoria.

“These were very difficult matches and in the last few years we had never won here,” said Sarri.