Ram Jethmalani: A Doyen Of Legal Profession And Maverick Politician Who Lived On His Own Terms 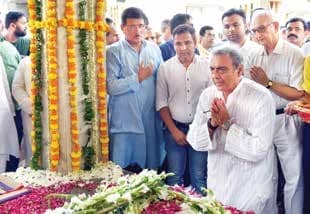 NEW DELHI: Ram Jethmalani, a doyen of legal profession who bid adieu to the world at the age of 95, leaves behind a rich legacy of his sevendecade-long career when he was in action in scores of sensitive court battles and had earned the reputation of a maverick politician for his bold and sometimes controversial stands.

Jethmalani breathed his last at 7.45 am at his official residence in New Delhi.

He began practising as a lawyer in Pakistan's Karachi in pre-Partition India after obtaining the degree of law from Shahani Law College, Karachi, at the age of 17.

A rebel by nature, he lived the life to the fullest, donning different hats -- lawyer, parliamentarian, minister -- but was not a quintessential politician constrained by party lines.

The advocate successfully petitioned the High Court in Karachi for lowering the minimum age for practising to 21 and later set up a law firm in Karachi with his friend and senior, AK Brohi.

He moved to Mumbai in 1948 after the partition and started practising in the commercial capital of the country where he won a legal battle opposing the Bombay Refugees Act which allowed the State to relocate, sequester and question refugees anytime.

Jethmalani earned the distinction of being the youngest member of the Bar -- and went on to become the oldest member. He was India's one of the highest paid advocates.

Jethmalani opposed the Emergency imposed by the Indira Gandhi government and the clamping of Maintenance of Internal Security Act, a controversial law allowing authorities to arbitrarily arrest those opposing the government decision.

His political career was no less interesting -- he reached parliament from the Janata Party, the BJP, the RJD, served under Atal Bihari Vajpayee and later contested against him, was expelled from the BJP and sued the party for that, and at the age of 64, in 1987, announced his candidacy for the post of President.