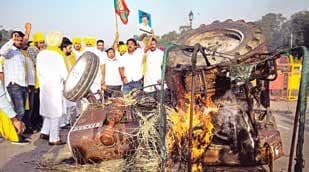 NEW DELHI: More than a dozen members of the Punjab Youth Congress on Monday set ablaze a tractor at Rajpath near India Gate in the heart of Lutyens' Delhi - a high-security zone - as part of their protest against the recently passed controversial farm legislation that several opposition parties have dubbed as ‘anti-farmer’.

Six people, five from Mohali in Punjab and one from Pathankot, have been arrested in connection with the incident, police said, adding that an FIR had been registered under non-bailable sections of the Prevention of Damage to Public Property Act, sections of the Disaster Management Act, Epidemic Diseases Act and other sections of the IPC. The arrested accused have been identified as Om Prakash, Manjot Singh (36), Raman Deep Singh Sindhu (28), Rahul (23), Sahib (28) and Sumit (28).