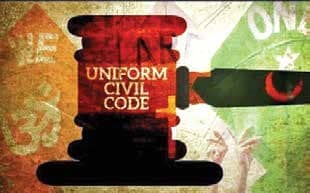 The BJP, in its manifesto before the 2019 LS elections, had mentioned the UCC saying Article 44 of the Constitution lists it as one of the Directive Principles of State Policy

NEW DELHI: A fresh tug of war is on the cards in the Delhi High court between the supporters of Uniform Civil Code and those opposing it as a new PIL was filed on Monday seeking that a high level panel be set up for drafting the UCC.

The PIL was tagged with a similar pending petition which has been opposed by the All India Muslim Personal Law Board (AIMPLB).

A bench of Chief Justice D N Patel and Justice C Hari Shankar said it will hear both the petitions on Tuesday.

The first petition, filed by Bharatiya Janata Party leader and lawyer Ashwini Kumar Upadhyay, has sought direction to drafta UCC to promote unity, fraternity and national integration. The fresh petition, filed by advocate Abhinav Beri, was mentioned by Upadhyay before the bench and both the petitions have been tagged together for hearing on Tuesday.

The fresh plea has sought a direction to the Centre to constitute a judicial commission or a high level expert committee to drafta UCC for securing gender justice, equality and dignity of women.