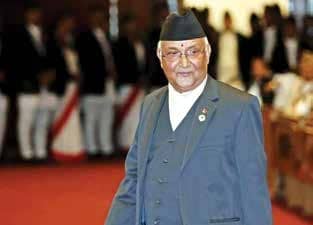 KATHMANDU: The political future of Nepal's embattled Prime Minister K P Sharma Oil will now be decided on Wednesday after the ruling communist party postponed for a third time a crucial meeting, a day after the Chinese ambassador met a senior leader amidst the growing demand for his resignation over his style of functioning and anti-India statements.

The meeting of the Nepal Communist Party's 45-member powerful Standing Committee was scheduled to be held on Monday. But it was postponed at the last minute.

Prime Minister's press advisor Surya Thapa said the meeting was postponed until Wednesday. The reason for the deferment for a third time was not revealed.

The development came as China's ambassador Hou Yanqi met with the senior leader of the NCP and former prime minister Madhav Kumar Nepal on Sunday.

The differences between the two factions of the NCP -- one led by Oli and the other led by party's executive chairman Pushpa Kamal Dahal 'Prachanda' on the issue of power-sharing -- intensified after the prime minister unilaterally decided to prorogue the budget session of Parliament on Thursday.