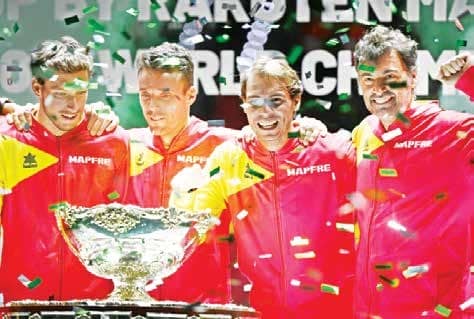 MADRID: Rafael Nadal put the finishing touches to his extraordinary year by clinching a sixth Davis Cup title for Spain on Sunday as he beat Denis Shapovalov in Madrid to seal victory over Canada.

Nadal’s 6-3, 7-6 (9/7) win over Shapovalov in front of an adoring home crowd at the Caja Magica gave Spain an unassailable 2-0 lead after Roberto Bautista Agut earlier battled past Felix Auger-Aliassime 7-6 (7/3), 6-3.

“I’m incredibly happy to end the year like this,” said Nadal afterwards.

The 33-year-old had been an unstoppable force in Spain’s pulsating semi-final against Britain on Saturday and never looked like letting this chance slip, with King Felipe VI and Real Madrid’s Sergio Ramos watching on, along with Barcelona defender Gerard Pique.

Pique’s marketing company Kosmos have been at the heart of the raftof changes to this 119-year-old competition but Nadal’s brilliance has been familiar, even if this will surely go down as one of the finest seasons of the 19-time Grand Slam champion’s sparkling career.