N-E Delhi Riots: Whatsapp Chat Contains Disclosures Of As Many As 19 Murders 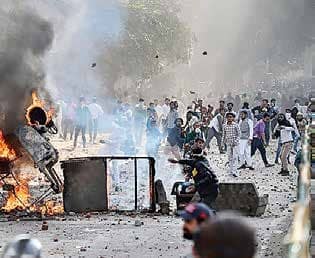 As skeletons start tumbling from the closet that is the “Kattar Hindut Ekta” WhatsApp group, created and used by Hindu mobs to identify and target Muslims during the north-east Delhi riots in February this year, transcripts submitted by the Delhi Police to a local court here with one of the chargesheets disclose the commission of as many as 19 murders, nine of which were perpetrated by what members claim to be a group of Rashtriya Swayamsevak Sangh (RSS) members.

According to the chat group transcripts accessed by Millennium Post, at several points between February 25 and 26, multiple members of the WhatsApp group had disclosed that at least 19 Muslims had been killed in different areas of North East Delhi such as Maujpur, Bhagirathi Vihar and Brijpuri.

Significantly, in the same chargesheet and other chargesheets filed by the Delhi Police against members of this WhatsApp chat between ‘Kattar Hindut Ekta’ Group clearly falls in the category of Extra Judicial Confession”.

According to the chat records, on February 25, around 8 pm, one user posted, “bhai rss ke logg aagye hai yha supprt... beijpuri (Brijpuri) me or 9 mullo ko maar diya gaya hai (People from the RSS have come here for support in Brijpuri and 9 Muslims have been killed”.