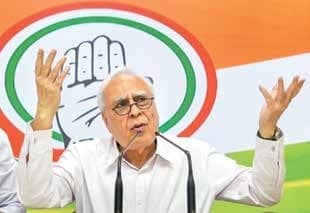 NEW DELHI: The Congress on Sunday launched an all-out attack on the Modi government alleging that there had been "no development" in the first 100 days of its second term, with Rahul Gandhi saying there was a "glaring lack" of leadership, direction and plans where it is needed the most -- to turnaround a "ravaged economy".

Congress' senior spokesperson Kapil Sibal, addressing a press conference, also alleged that the government's 100 days in office have been characterised by "arrogance, uncertainty and vendetta politics".

He attacked the dispensation over issues such as the state of the economy, the situation in Kashmir, the National Register of Citizens (NRC) in Assam and action by probe agencies against opposition leaders.

Taking a dig at the Modi government, Gandhi "congratulated" it on 100 days of "no development".

"Congratulations to the Modi govt on #100DaysNoVikas, the continued subversion of democracy, a firmer stranglehold on a submissive media to drown out criticism and a glaring lack of leadership, direction and plans where it's needed the most -- to turnaround our ravaged economy," he tweeted.

Congress general secretary Priyanka Gandhi Vadra said the Modi government is mum after "ruining the economy" and alleged it is trying to hide the grim situation in the country.

"The government is mum after ruining the economy. The companies are in danger, while trade is in doldrums," she said in a tweet in Hindi.

"Through drama, deceit, lies, and propaganda, they are trying to hide the country's grim situation," she said, using the hashtag '100DaysNoVikas' (100 days, no development).