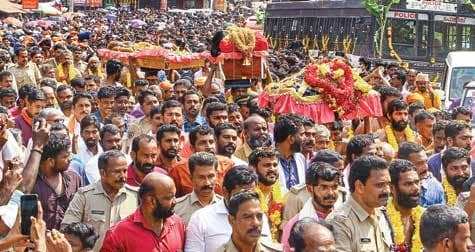 The 9-judge Constitution bench of Supreme Court also clarified: ‘We are not hearing the review petitions in the Sabarimala case. We are only on the reference points’

NEW DELHI: The Supreme Court Monday asked four senior advocates to convene a meeting to decide on reframing and adding issues to be deliberated by it in the matter relating to discrimination against women in various religions and religious places including Kerala’s Sabarimala Temple.

A 9-judge Constitution bench, headed by Chief Justice S A Bobde, commenced the hearing on the matter referred to it by a 5-judge bench on November 14 last year on various issues including evolving a judicial policy to deal with matters relating to religions, their essential practices and the scope of judicial interventions.

At the outset, senior advocate Indira Jaising, who has been appearing in Sabarimala and other matters, opposed the reference.

She said without holding that the Sabarimala judgement was wrong, the matter could not have been referred to a larger bench and moreover, the 7-judge bench verdict in the Shirur Mutt case has not been doubted or assailed to justify a reference to the larger bench.