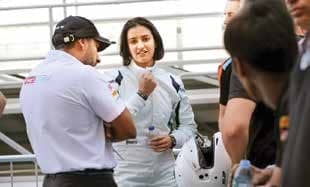 Diriyah, Saudi Arabia: Sliding behind the wheel of a sleek electric SUV, Reema Juffali is set to blaze a trail in male-dominated motorsports as the first Saudi woman to race in the kingdom.

Such adrenalin rushes were unimaginable for women in the ultra-conservative Islamic kingdom until June last year, when it overturned the world’s only ban on female motorists as part of Crown Prince Mohammed bin Salman’s wide-ranging liberalisation drive.

Juffali, a 27-year-old who made her motoring debut just months after the decades-old ban ended, will compete Friday and Saturday in the Jaguar I-PACE eTROPHY, an all-electric race in Diriyah, close to the capital Riyadh.