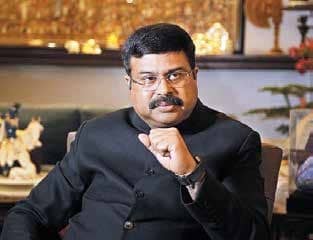 Mounting geopolitical uncertainties, rising US oil and gas production, and India's insatiable energy appetite has created need and opportunity for the two nations to augment bilateral energy ties to a new level

NEW DELHI: India's energy trade with the US is likely to jump by over 40 per cent to $10 billion in 2019-20, as the world's third-largest oil consumer seeks to move away from its traditional suppliers in the Middle East, Oil Minister Dharmendra Pradhan said on Monday.

Mounting geopolitical uncertainties, rising US oil and gas production, and India's insatiable energy appetite has created both the need and the opportunity for the two nations to liftbilateral energy ties to a new level.

India in October 2017 began importing crude oil from the US and in March 2018 it got the first shipment of liquefied natural gas (LNG) from there.

In the last one year, the import of US crude oil has doubled and New Delhi is now closing on the biggest longterm LNG import deal.

"In 2018-19, total import of crude oil, LNG and cooking coal stood at $7.2 billion. In the current fiscal year 2019-20, this may go up to $10 billion," Pradhan said at US-India Strategic Partnership Forum's Annual Leadership Summit here.

In a short period, the US has become one of the top 10 sources of crude oil for India and also an important source for LNG. For the US, India is now the fourth-largest importer of crude oil and the third-largest for LNG.