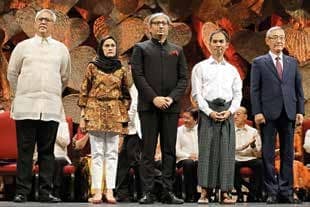 MANILA: The Indian media is in a state of "crisis" which is not accidental or random, but systemic and structural, prominent Indian journalist Ravish Kumar said here on Monday as he received the prestigious 2019 Ramon Magsaysay Award, regarded as the Asian version of the Nobel Prize.

Kumar, 44, is NDTV India's senior executive editor and one of India's most influential TV journalists who has been reporting real-life and underreported problems of ordinary people, said the award citation by the Ramon Magsaysay Award Foundation.

"The Indian media is in a state of crisis and this crisis is not accidental or random, but systemic and structural. Being a journalist has become a solitary endeavour...It has become all the more important to evaluate the crisis in the media," he said.

"While I am happy for myself today, I am also filled with sadness looking at the state of profession I represent," Kumar said.

Kumar was among five individuals who were declared winners of the award, which is Asia's highest honour and celebrates greatness of spirit and transformative leadership in Asia.