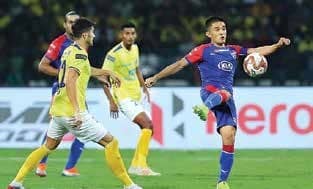 Though Kerala Blasters battled valiantly, Chhetri scored the winner with a brilliant header in the 55th minute to preserve his side's unbeaten record in the ISL. The win saw the Blues climb up to second on the table with nine points from five games while Kerala Blasters, winless after the opening match, are at seventh.

The away side showed plenty of intent right from the start, pressing Bengaluru hard and forcing mistakes from the reigning champions.

The first chance did fall for Kerala Blasters when Sergio Cidoncha picked out Rahul KP at the far post with a lovely cross. However, the youngster mistimed his header and the chance went abegging.

An energetic Kerala Blasters continued to dictate terms and should have taken the lead six minutes later. Bartholomew Ogbeche fed Raphael Messi Bouli into the box. He tried to return the favour, but a sliding Ogbeche just could not get there.