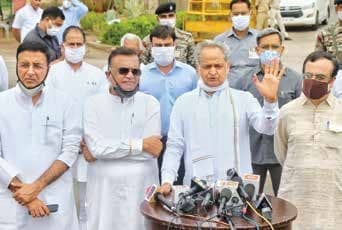 JAIPUR: Congress MLAs in the Ashok Gehlot camp on Friday ended a five-hour dharna at the Raj Bhawan after an assurance from the Governor Kalraj Mishra that he will go by the constitutional provisions on summoning an Assembly session.

Congress leader Randeep Surjewala said the Governor has assured that he will abide by Article 174 of the Constitution.

The Article deals with the Governor’s role in summoning a session of the state Assembly.

The Governor, however, wanted the state government’s clarification on some points before he makes the announcement.

Legal experts earlier said that the Governor has no option but to accept the recommendation of the Ashok Gehlot Cabinet and convene the Assembly session.

Later, a statement from the Raj Bhawan said Governor Kalraj Mishra, in a six-point questionnaire, has asked the government to respond as to why the Assembly session is being called.

“When the government has a majority, what is the justification for convening the session to prove it then?” he posed. The Governor also said that neither justification nor any agenda has been proposed to call the session on short notice.