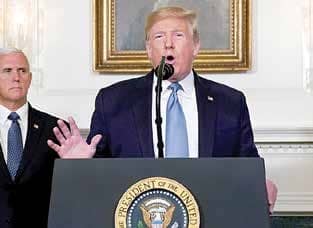 US President says Taliban admitted to an attack in Kabul that killed one of our great soldiers, and 11 other people. So I immediately cancelled the meeting & negotiations

WASHINGTON DC: US President Donald Trump has called off a “secret” summit with Taliban leaders and Afghan President Ashraf Ghani after the insurgent group claimed responsibility for an attack in Kabul that killed an American soldier, dealing a significant blow to months-long negotiations that were nearing a peace agreement.

In a series of tweets on Saturday, Trump disclosed that he was to meet the Afghan president and senior Taliban leaders on Sunday at his Camp David retreat. But he cancelled the meeting after the Taliban admitted it was behind a suicide car bomb attack Thursday that had killed an American soldier and 11 others in the capital of Kabul.

“Unbeknownst to almost everyone, the major Taliban leaders and, separately, the President of Afghanistan, were going to secretly meet with me at Camp David on Sunday. They were coming to the United States tonight, Trump tweeted.

Unfortunately, in order to build false leverage, they admitted to.. .an attack in Kabul that killed one of our great-great soldiers, and 11 other people. I immediately cancelled the meeting and called off peace negotiations, Trump said.