Campaigning Ends in Haryana, Over to 1.83 Crore Voters Now 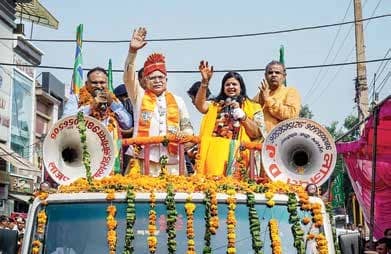 The elections will be held on Oct 21, results of which will be declared on Oct 24

The campaigning for the Haryana assembly elections ended on Saturday evening with Prime Minister Narendra Modi addressing two rallies in Rewari and Ellenabad on the last day.

As many as 19,578 polling stations, 13,837 of these in rural areas, had been set up across the state amid tight security arrangements, officials said.

The state has 90 assembly segments, for which 1,169 candidates, including 105 women, are in the fray.

While the ruling BJP made the scrapping of the special status of Jammu and Kashmir a major poll plank, the opposition slammed the government over issues of unemployment and farmers' distress during electioneering.

The ruling Bharatiya Janata Party has set a target of bagging over 75 seats.

Currently it has 48 members in the 90-member assembly. To give a boost to the election campaigning, Prime Minister Narendra Modi held two rallies in Ellenabad in Sirsa and Rewari.