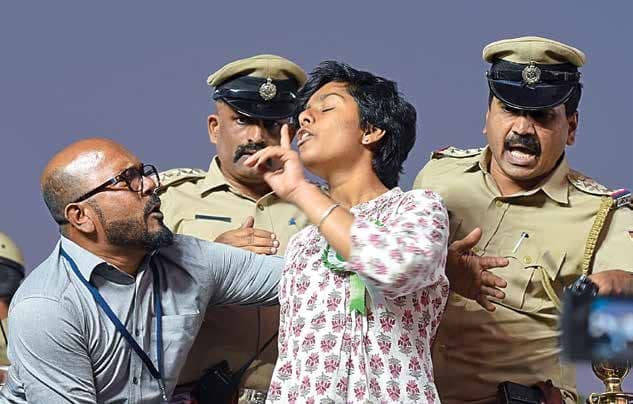 In a related development, security was provided at the home of the woman, Amulya Leona, in Chikkamagaluru district, after it was attacked, allegedly by right wing workers

BENGALURU: A young woman who raised pro- Pakistan slogans at an anti-CAA rally here last evening has been booked for sedition and remanded to judicial custody, police said on Friday.

Karnataka Chief Minister B S Yediyurappa said the woman had links with Naxals.

In a related development, security was provided at the home of the woman, Amulya Leona, in Chikkamagaluru district, after it was attacked, allegedly by right wing workers.

Officials said some people had targeted her home on Thursday evening and the window panes were damaged.

Amulya had raised "Pakistan Zindabad" slogans thrice after the organisers, under the banner of "Save the Constitution", invited her to address the gathering in the presence of All India Majlis-e-Ittehadul Muslimeen (AIMIM) chief Asaduddin Owaisi, on Thursday.

After being removed from the stage, she was arrested on charges of sedition and produced before a magistrate's court, which remanded her to 14 days judicial custody.

Her father Wazi also called for action against her as per the law, saying she has made an "unforgiveable mistake."

On Friday, Yeddiyurappa said: "Importantly, the organisations that are behind people like Amulya and nurturing them, if we don't take action against such organisations, such things won't end."