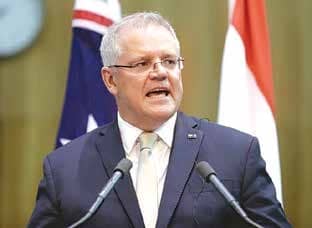 MELBOURNE: Prime Minister Scott Morrison on Thursday announced the suspension of Australia's extradition treaty with Hong Kong over the controversial Chinese national security law imposed there and offered visas to 10,000 students and temporary skilled workers from the former British territory to start a new life in this country.

The move came after Chinese President Xi Jinping last month signed a controversial legislation to impose a national security law in Hong Kong that allowed Beijing to crackdown against dissent, criminalising sedition and curtailing protests with punishments up to life in prison.

Morrison said the new national security laws imposed by China in Hong Kong represented a fundamental change of circumstances for many governments around the world.

Our decision to suspend the extradition agreement with Hong Kong represents an acknowledgement of the fundamental change of circumstances in relation to Hong Kong because of the new security law, which in our view undermines the 'one country, two systems' framework, and Hong Kong's own basic law and the high degree of autonomy guaranteed in the Sino-British Joint Declaration that was set out there, Morrison said in Canberra.