After ‘Howdy Modi', Its ‘Namaste Trump' As Both Leaders Look To Strengthen Ties 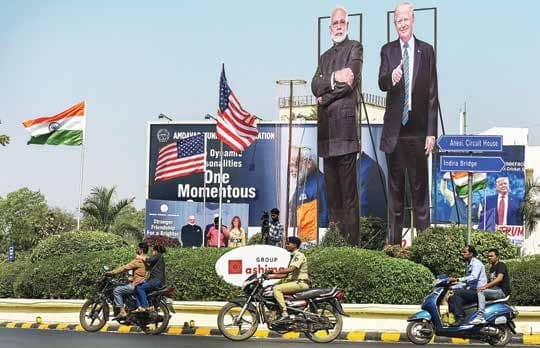 NEW DELHI/WASHINGTON DC: With the next Presidential Election knocking on US President Donald Trump’s door, his state visit to India, which is seemingly an extension of his outreach for Indian-American voters witnessed at the Howdy Modi event last year, is set to take off today with the Air Force One landing in Ahmedabad around 12 pm. While both the Trump administration and the Narendra Modi government have clarified that the two leaders will discuss trade, defence and other bilateral issues, a final trade deal is not likely to materialise during this visit.

Trump, who is also accompanied by daughter Ivanka, son-in-law Jared Kushner and top brass of his administration, will get a taste of India’s cultural potpourri during his Gujarat itinerary which is high on symbolism, especially after the bonhomie between the two leaders at the ‘Howdy, Modi!’ event in Houston.

“Prime Minister Narendra Modi is a friend of mine. I had committed to this trip long time back. I will be addressing a big rally,” Trump, who is the seventh US president to visit the country, said at the White House before leaving for India.

The nearly 36-hour-long visit by Trump is also set to send across a clear message of growing congruence of interests on major geopolitical developments in the region and beyond, particularly when China has been expanding its military might and economic clout.

Dance groups and singers from different parts of the country will be performing on stages that are dotting the 22-km route of the ‘India roadshow’ in the city that has was been spruced up for Trump’s visit. Huge billboards of the two leaders and replicas of historic places in Gujarat have also been placed along the roads where people will greet the two leaders.

“India looks forward to welcoming @POTUS @realDonaldTrump. It is an honour that he will be with us tomorrow, starting with the historic programme in Ahmedabad,” tweeted Modi.

Over 10,000 police personnel, besides officials of the United States Secret Service, and personnel of the National Security Guards (NSG) and the Special Protection Group (SPG) have been deployed for the high profile visit.