An immunology expert last night warned Ireland is “getting closer” to lockdown measures due to people flouting life-saving rules.

Professor of Experimental Immunology Kingston Mills said stringent measures seen in Wuhan, Italy and Spain could be the next step here if social distancing is ignored.

The Trinity College Dublin academic told the Irish Sunday Mirror: “You don’t put in place draconian measures immediately. Some people abide by the rules but others aren’t, as I saw with an example of people congregating in Dun Laoghaire.

“But we are getting closer to that [lockdown]. Measures may need to be put in place and we need to put in measures on restricting travel sooner rather than later.

“If we procrastinate and don’t adhere to the recommendations from the HSE and Department of Health, we will protract the period we will have to be in isolation. The sooner all people abide by social distancing, the sooner we will get back to normality.”

During the week Wuhan, the epicentre of the coronavirus outbreak, reported zero new infections for the first time after restricting all public movement. 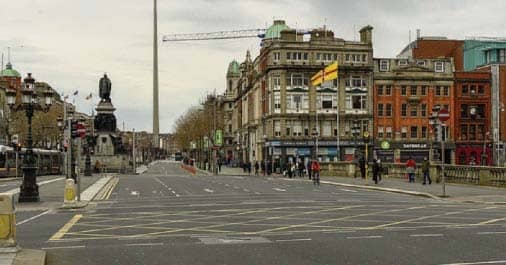 However, the lockdown enforced on Italy has not proved as effective as the death toll has escalated and soldiers were drafted in to enforce restrictions.

Meanwhile, Ireland is still open for business with flights from around the world entering and leaving Dublin Airport yesterday.

Among the arrivals were flights from Alicante, Tenerife, Fuerteventura, London, Berlin, Lisbon and Paris.

While planes departed to New York, Boston, Faro, London and Dubai, among other destinations.