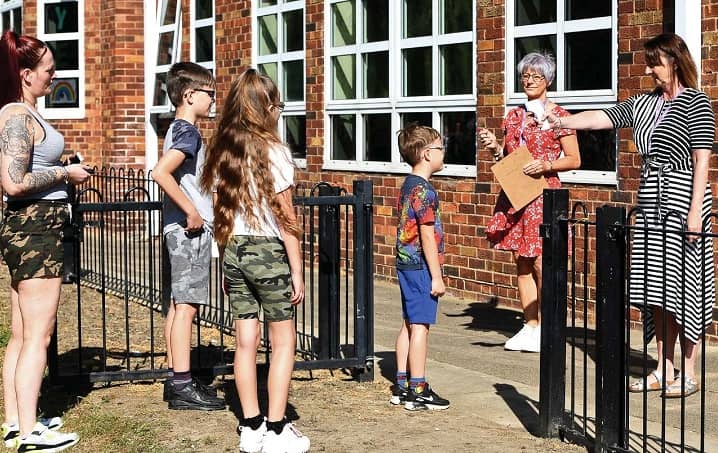 Teachers check pupils’ for a temperature in Grimsby, yesterday; masks on walk to school in Shoreham, West Sussex, and queuing, left, at Queen’s Hill, near Norwich

More than two million pupils were allowed back into their classrooms yesterday.

Youngsters in Reception, Year One and Year Six in England were able to return for the first time in 10 weeks.

Early estimates of attendance suggested the majority of the country’s 16,800 primary schools had opened and around 1.5 million youngsters had resumed their education.

The Association of School and College Leaders said that of the facilities which reopened, attendance yesterday was “highly variable”, ranging between 40 and 70 per cent.

But the union’s general secretary Geoff Barton said this figure is likely to increase as “parents become confident about sending their children to school”.

But huge numbers were forced to stay at home after 54 councils sided with teaching unions to oppose Boris Johnson’s plans.

Schools in Brighton and Hove, Calderdale, East Yorkshire, and the Wirral have been told to stay closed, while some councils in London left it up to headteachers.

Schools have remained open throughout the coronavirus restrictions – but only for the children of key workers and vulnerable children. Penny Sheppard, head teacher of Queen’s Hill Primary and Nursery School near Norwich, had 46 youngsters attending out of a total of 75 in reception after reopening “in a child-friendly way”.