Why So Much Fuss Over A Yogi?

It isn't a big deal for a chief minister if he chooses to transform his public appearance. But the Adityanath phenomenon has once again exposed the faultlines of a confused Hindi heartland. Publicly, many of Indian public detest Lutyens' Delhi for all its symbolism. Privately, they just can't digest a saffron-clad, non-English-speaking ascetic settling down as a decision-maker in power politics. This defect is genetic.

The BJP victory in Uttar Pradesh has shaken up the media and other political parties not only on account of the scale of the victory, but also its aftermath. In what many people term a "surgical strike", Yogi Adityanath has been chosen the Chief Minister, shocking many, with the Leftists calling it a diabolical move. Many immediately branded him as "communal", a "bigot", "a Hindu fundamentalist", etc without even giving the new Chief Minister a chance to explain his agenda. Typical parts of the media, who have attributed to themselves the right to decide for the rest of us, are playing the role of the opposition, and some expressed concern whether certain communities will feel threatened. Broadly, there are three sets of people divided vertically over Adityanath as compared to the two, which have been split over Prime Minister Narendra Modi. Liberals and secularists have been opposing while corporates and pro- Hindutva advocates have been supporting Modi ad nauseam since the Anna Hazare protests scripted the fall of Manmohan Singh's government.

In Adityanath's case, a third category of Indians has overnight become too vocal to be ignored. It's a massive bloc of Indians carrying a DNA heavily hung over by British colonialism. Adityanath also doesn't fit into the all-pervasive American narrative in which capitalism--and not religion or culture- -is the central subject.

Born Ajay Mohan Bisht, he studied BSc before joining the priesthood. He was initiated in 1994 by his guru Mahant Avaidyanath, the head priest at Gorakhpur's Gorakhnath shrine. As a yogi, Adityanath captured the imagination of the faithful. His popularity soared after his mentor anointed him as the chief of Gorakhnath. Adityanath won his election to Parliament at age 26, in 1998. He was re-elected four times later.

But he never shed his outward identity. Nor has he ever been apologetic about his outspokenness. A breed of Indians, which lampoons Baba Ramdev for his dress, isn't able to accept a chief minister primarily for his saffron robes.

Imagine if Adityanath hadn't turned a cleric, did not dress up the way he does and had graduated from an Ivy-League college, perceptions would have been radically different. No matter if he still pursued aggressive Hindutva, he would likely be embraced as a scholar on Sanatan Dharma and as one of India's youngest lawmakers in Parliament.

Image makeovers for powerful leaders aren't an issue. Backed by wealthy capitalists and PR professionals, they can very well bury their controversial pasts and market their humble beginnings to their constituencies. 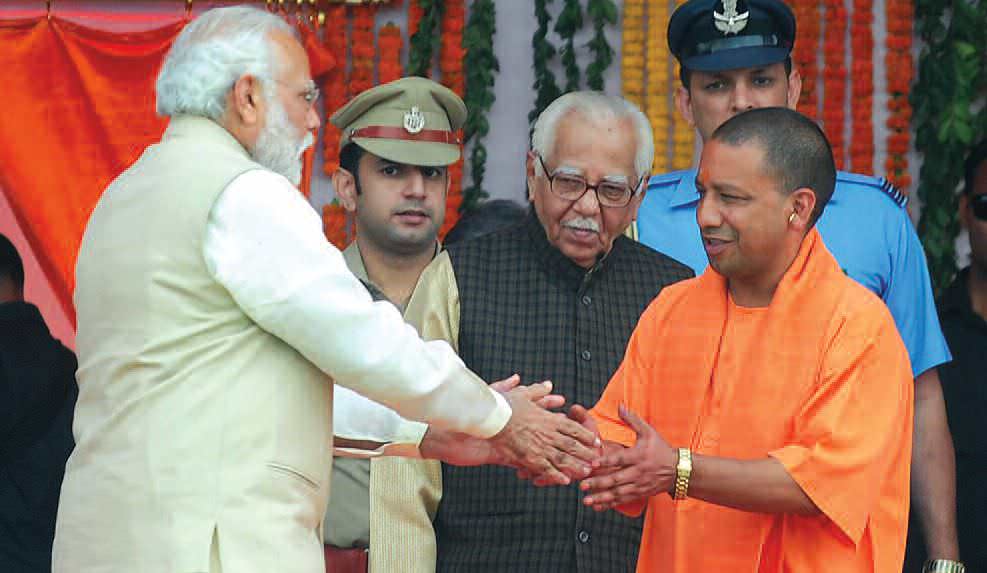 It isn't a big deal for a chief minister if he chooses to transform his public appearance. But the Adityanath phenomenon has once again exposed the fault-lines of a confused Hindi heartland. Publicly, many of Indian public detest Lutyens' Delhi for all its symbolism. Privately, they just can't digest a saffron-clad, non-English speaking ascetic settling down as a decision-maker in power politics. This defect is genetic.